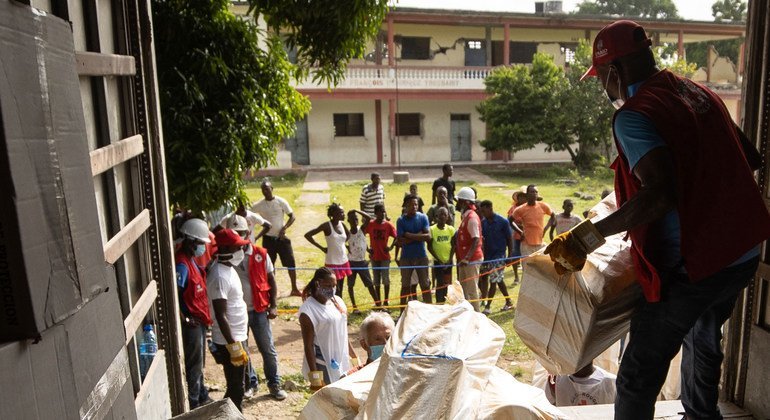 According to their analysis, US policies have also deterred Haitians from pursuing protection including asylum claims and forced them to return to other countries, “where they face an atmosphere of racial discrimination, gender violence and xenophobic violence”, said a news release issued on behalf of the experts, on Monday.

“In expediting the collective expulsion of Haitian migrants, the United States is subjecting a group of predominantly Black migrants to impermissible risks of refoulement and human rights abuse without any individualised evaluation,” the experts said.

“International law prohibits arbitrary or collective expulsions. States cannot label all migrants of a certain nationality per se threats to national security, and all migrants, no matter their nationality, race or migration status, must be guaranteed the protections called for under international law,” they reminded the US Government.

The mass deportations seemingly continue a history of racialized exclusion of Black Haitian migrants and refugees at US ports of entry, the experts said.

Since the start of the COVID-19 pandemic, the Title 42 policy carried out by the US Government, initially under the previous Trump administration, has authorized the collective expulsion of any migrants and asylum seekers who seek to cross US land borders, without an individual evaluation of their circumstances and protection needs, experts noted.

When it comes to relevant international law, the US has ratified the 1967 Protocol Relating to the Status of Refugees, the Convention against Torture and Other Cruel, Inhuman or Degrading Treatment or Punishment, the International Covenant on Civil and Political Rights (ICCPR), and the International Convention on the Elimination of All Forms of Racial Discrimination.

Afoul of the law

The experts have written to the US Government, expressing concern that its recent immigration enforcement activities against Haitians abroad, likely run afoul of international refugee law and international human rights law.

The independent experts questioning US actions over the expulsions are Tendayi Achiume, Special Rapporteur on contemporary forms of racism, racial discrimination, xenophobia and related intolerance; together with Dominique DAY (Chair); Ms. Catherine Namakula, Miriam Ekiudoko, and Sushil Raj – all members of the Working Group of Experts on People of African Descent.

Special Rapporteurs are part of what is known as the Special Procedures of the Human Rights Council, and along with other independent experts are appointed by the Council, without being paid for their work, or becoming UN staff.

They are independent from any government or organization and serve in their individual capacity.

In Haiti, humanitarians warned on Monday that lives are likely to be lost if fuel supplies do not reach hospitals immediately, as the country continues to be rocked by multiple crises including the aftermath of a major earthquake, economic turmoil and widspread political unrest, following the assassination of its president earlier in the year.

Roadblocks are preventing the delivery of fuel, creating obstacles to the provision of essential services and are also preventing access by humanitarian workers, said the UN Spokesperson, briefing journalists in New York.

Hospitals and medical centres are hit especially hard. In Port-au Prince, as well as other cities, hospitals are reporting extremely low fuel reserves needed to power the generators that keep services going.

In two of the capital’s major hospitals, pediatric services for 300 children, maternal health care for 45 women and critical care for 70 other patients will be interrupted if supplies are not received by tomorrow.

The UN is calling on all those who have an influence over the current situation to ensure that fuel supplies can be delivered to hospitals, and that humanitarian access to earthquake-impacted victims in the southwest is not further disrupted.