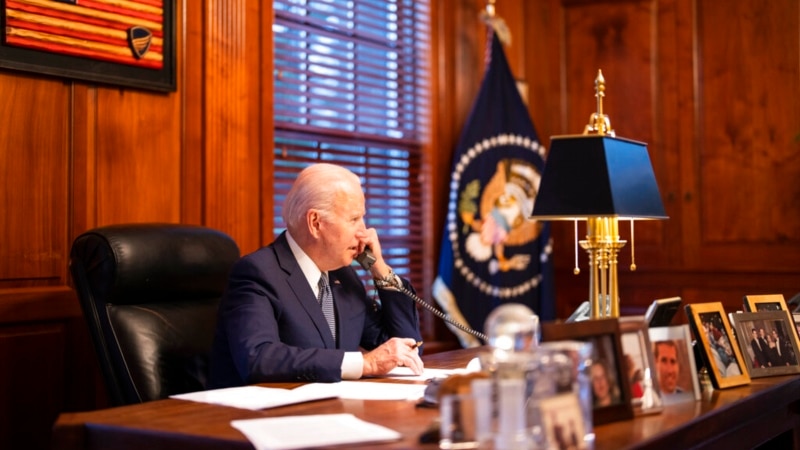 Biden and Zelenskiy discussed measures to “de-escalate tensions in Donbas and active diplomacy to advance implementation of the Minsk Agreements,” White House press secretary Jen Psaki said in a statement released after the call ended.

However, Biden “reaffirmed the United States’ commitment to Ukraine’s sovereignty and territorial integrity,” the statement said, adding that Biden also “underscored the commitment” of the U.S. to the principle of “nothing about you without you.”

“We appreciate the unwavering support of Ukraine,” Zelenskiy said.

Biden has made little progress with Russian President Vladimir Putin in getting him to withdraw about 100,000 troops stationed along Russia’s border with the former Soviet republic, although U.S. officials have said they do not believe Putin has decided to invade Ukraine.

The U.S. and Russian leaders held a 50-minute phone call last Thursday, with Biden again warning Putin that the United States and its Western allies would impose significant economic sanctions against Moscow were Putin to carry out a Ukraine invasion. Biden said last month he not considering a military response.

The Kremlin in turn said last week that Putin told Biden in their call that new, tougher sanctions could lead to a complete rupture In Washington-Moscow relations.

The U.S. has been dispatching small arms and ammunition to Ukraine, along with Javelin missiles it says should only be used in defense.

The White House says that Russian and American officials will participate in three separate rounds of talks this month: first through bilateral talks scheduled to start January 10, and then through multiparty talks with the NATO-Russia Council, and with the Organization for Security and Cooperation in Europe.

“President Biden reiterated (in his call with Putin) that substantive progress in these dialogues can occur only in an environment of de-escalation rather than escalation,” Psaki said.

In the talks ahead, Russia is demanding that NATO, the seven-decade-old military alliance formed after World War II, deny membership to Ukraine and reduce its deployments in central and eastern Europe. White House officials have declined to discuss details of private talks.

Some information for this report came from The Associated Press.