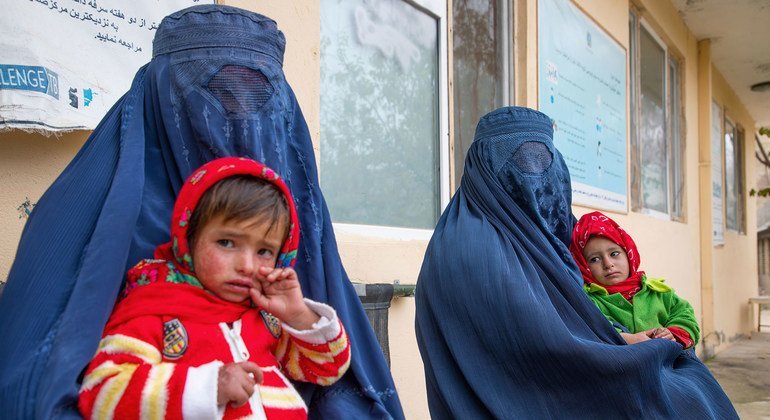 Humanitarian needs in the country have increased, the UN agency said, with all 34 provinces facing crisis or emergency levels of food insecurity.

⏯️On the ground in #Afghanistan, working tirelessly to meet the most pressing needs of the Afghan people.

The task is mammoth but so is our determination. pic.twitter.com/H9SCJbGLwz

As a result, some 23 million Afghans require urgent food assistance, a figure never seen before.  This includes more than three million children who are at risk of severe hunger and the life-threatening consequences of malnutrition.

“The international community have very real concerns and at this time we need to separate the humanitarian imperative from the political discussions,” said Mary-Ellen McGroarty, WFP’s Afghanistan Country Director.

WFP is seeking $2.6 billion for its operations in Afghanistan over the coming year.

Visits to remote areas of the country have revealed the plight of citizens coping amid the impacts of a prolonged drought, economic collapse and the COVID-19 pandemic, coming on top of years of conflict, which culminated in the Taliban’s takeover of the country in August.

The rising cost of wheat has led to an 80 per cent increase in the price of bread, a staple for many families.

In some areas, people are compensating by consuming a variety of wheat that has been known to cause neurological problems. Many are surviving on bread and tea with milk, sometimes even using a non-nutritional whitener when they can’t afford the real thing.

Meanwhile, economic collapse has left many jobless and unable to buy food for their families.

In the northern city of Faizabad, for example, school principals, teachers and government workers are among residents now selling personal effects such as teacups, paint rollers and clothing on the streets.

After almost 10 years, WFP staff are now able to access the village of Aqkoprok, located several hours south of the regional hub of Mazar-i-Sharif.  Although students there are now back in school, most teachers have not been paid since July.

WFP reported that Aqkoprok has seen a 30 per cent increase in severe and moderate malnutrition since October. a situation that is reflected across the country.

More than half of Afghanistan’s population is facing acute hunger, and 3.2 million children are suffering from malnutrition.

Parents in Aqkoprok have been bringing their boys and girls to a health clinic to be tested for malnutrition, where they are seen by Dr. Mustafa.

While the number of people in Afghanistan requiring assistance is “staggering”, Ms. McGroarty feared this is just the tipping point. It is young children who are “paying the incredible price”, she said.

“We are only in November, and this is what we are already seeing before we go into the heart of winter? And these are the children that are making it to the hospitals. How many more are behind them, that their families are unable to bring them to the hospital?”

Millions of Afghans are counting on WFP for life-saving food this winter.  Without it, they will be forced to choose between migration and starvation, the agency warned.

Mahmoud, 17, was among people at a WFP food distribution site in Mazar-i-Sharif last week, accompanied by his mother and brother.  His father is dead and his mother is going blind.

The teenager had dreams of becoming a doctor, but due to the economic collapse he can no longer afford to study.  After his brother migrated to Iran to find work, Mahmoud was left to take care of his mother and younger brother.

“Maybe it is different for other countries,” he wondered. “In Afghanistan, every time people just work for food and they just want to find food for eating and they don’t think to another thing…they just think how to find food and how to fill up and to bring food for their children and for their wives.”

WFP is ramping up its life-saving support in Afghanistan, with the goal of reaching 24 million people in 2022.

So far this year, the agency has provided food, cash and nutrition assistance to 12.4 million people.

But with winter setting in, the agency underscored the imperative not to wait a moment longer.