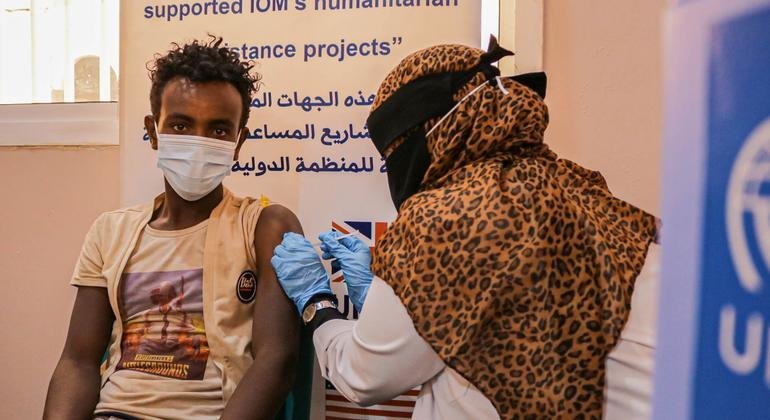 IOM’s Chief of Mission, Christa Rottensteiner, explained that “immunizing people on the move is key to combatting the spread of the disease.”

An estimated 36,000 migrants have been stranded on their journeys due to mobility restrictions, nearly 3,500 in Ma’rib alone. Many are sleeping in overcrowded and unsanitary conditions where the virus can easily spread.

“Vaccinating against COVID-19 is even more crucial in places like Ma’rib where ongoing conflict continues to weaken health facilities and disrupt the supply chain for medicines,” Ms. Rottensteiner said.

In Yemen, IOM and partners have begun vaccinating migrants against COVID-19. https://t.co/FkKX7iA0v4

According to her, there are still not enough doses to protect everyone in Yemen from this disease.

“More support from the international community to supply the country with enough vaccines will save lives”, she said.

So far, the pandemic has had severe consequences for the health, well-being and income of people in Yemen. COVID-19 has compounded the multiple crises already raging due to the on-going conflict which erupted in 2015, between rebel Houthi forces, together with their allies, and a Saudi-led coalition, that supports the internationally-recognized Government.

As of 12 December, there have been more than 10,000 cases reported in the country, but it’s difficult to assess the real impact because of limited testing and reporting.

Since April, IOM has been supporting efforts by the Ministry of Health to vaccinate at-risk and hard-to-reach populations. They have included health workers, people with chronic illnesses and elderly citizens.

One Ethiopian migrant who received the vaccine in Aden, Naima Mohammed, told the agency he had one family member die from COVID-19 last year.

Since then, he has come to the Migrant Response Point several times to get the facts about protection measures, such as handwashing and mask wearing.

Nearly seven years of conflict in Yemen have weakened the health system, which was already in peril before the virus reached the country.

The pandemic has had a dire impact on the most marginalized communities who lack access to health care, clean water and sanitation.

For the past three months, IOM has been conducting awareness-raising sessions to spread accurate information and debunk vaccine misconceptions. Vaccinated migrants will receive documents to allow them easier access to health facilities.

Since the beginning of the pandemic, IOM has helped prevent the spread of the disease and provide treatment for those infected.

The new vaccination campaign is implemented in partnership with the Ministry of Health and the World Health Organization (WHO) with support from the governments of Germany, Finland and the EU Humanitarian Aid programme.

Yemen’s civil war has generated the world’s worst humanitarian and development crisis and left parts of the country teetering on the brink of famine.

The UN humanitarian affairs office, OCHA, has estimated 80 per cent of the population, or 24 million people, rely on aid and protection assistance, including 14.3 million who are in acute need.

Following the outbreak of the conflict in 2015, the UN has repeatedly reiterated that there is no military solution to the Yemeni crisis and has called for a return to peaceful negotiation, through the Office of the UN Special Envoy for the country.

[ad_1] Reports claim soldiers in Myanmar have admitted to killing and torturing civilians. A report by the BBC said it…