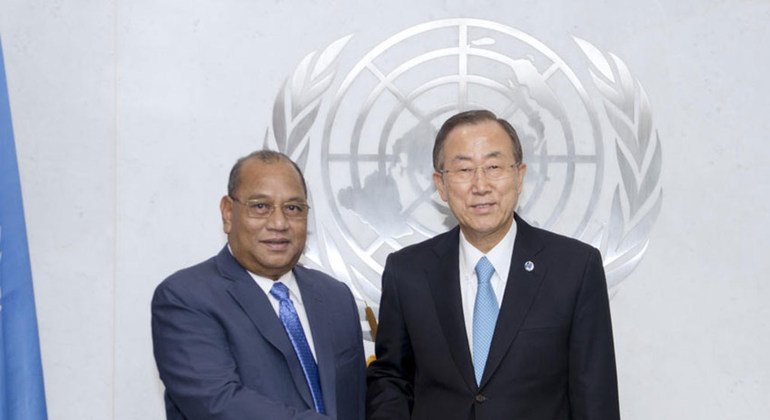 According to a readout of the meeting in New York, Mr. Ban congratulated President Christopher J. Loeak, whose country assumed the Chairmanship of the Pacific Islands Forum (PIF), an inter-governmental organization that aims to enhance cooperation between countries of the Pacific Ocean.

Mr. Ban and Mr. Loeak also discussed climate change, which is already impacting thousands of people in the Marshall Islands who are without reliable water supplies.

Earlier this year, the head of the UN office for disaster risk reduction (UNISDR) warned that Pacific small islands are threatened by drought and need to incorporate mitigation measures into their national planning and risk assessments.

During today’s meeting at the UN Headquarters, Mr. Ban and Mr. Loeak also discussed the 2014 Small Island Developing States (SIDS) Conference to be held in 2014 as a way to advance sustainable development.

The conference comes amid the 1,000 days of accelerated action towards reaching the eight anti-poverty targets known as the Millennium Development Goals (MDGs) and the establishment of a sustainable development agenda for the years after 2015.

The topic is due to be discussed at the high-level General Assembly debate which starts in New York on Tuesday.