In the most recent edition of The Kapil Sharma Show, SS Rajamouli, Jr. NTR, Ram Charan, and Alia Bhatt promoted their upcoming film RRR, which has now been postponed. There was a lot of laughing and fun as Kapil quizzed SS Rajamouli about his Hindi and poked fun at his own English, as well as making a subtle joke about Alia Bhatt’s fascination with the letter ‘R.’ 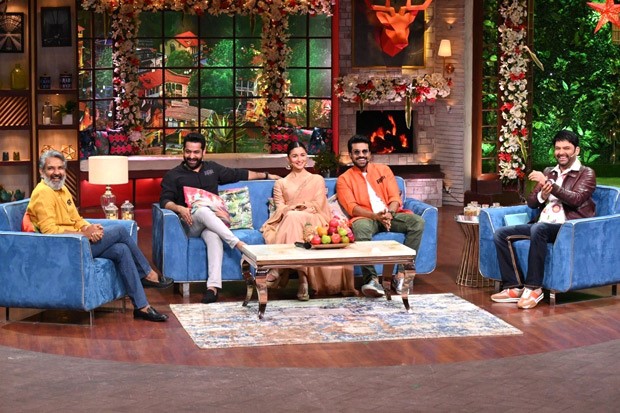 Kapil Sharma asked Rajamouli, “Do you understand Hindi?” Rajamouli replied, “I understand, but they don’t know if I am speaking another language.”

Kapil also said, “May God give you the strength to understand my English.” Following that, Kapil taunted the crew, saying that he half-expected the Baahubali theme tune to play after an elephant appeared in the RRR trailer. He enquired of the well-known director. “Are you just that simple or is it just to stay safe from the income tax surveillance?”

SS Rajamouli couldn’t help but laugh and declare that he was just that straightforward. Kapil then mocked Jr. NTR for taking PCR tests at the airport, before turning to Alia Bhatt. He inquired of Alia, “Did you hear the film’s story first, or did you just agree to do the film on hearing the word R?” This was a reference to Alia’s romance with Ranbir Kapoor.

Everyone else was laughing hysterically, and Alia was speechless. She replied, “You’re right. I did it because I heard the word R, and R stands for Rajamouli sir.”

Rajamouli then recalled that Archana Puran Singh had previously worked with him in a Telugu film. Kapil then mocked her about being contacted for the role of Katappa in the Baahubali franchise. Rajamouli reacted, “Yes, she was busy with your show, that’s why she couldn’t come.”