Recently Govinda visited Ranveer Singh on his The Big Picture. Through videos and pictures going viral on social media, one can sense that Ranveer Singh got teary eyed before his idol Govinda. After basking hymns and praises for his latest release ī, the actor got a chance to host his idol actor Govinda on his show ‘The Big Picture.’ On the event of the new year, the 90’s firebrand Govinda graces the show, and even before the show starts, Ranveer breaks into tears. As Govinda enters the show, Ranveer falls before him and shows his love for him. 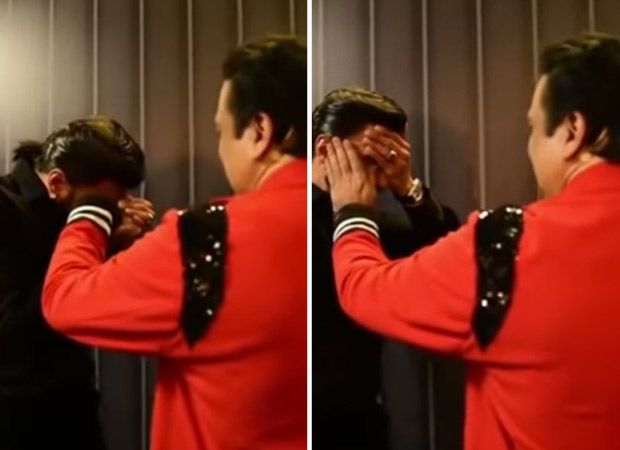 Govinda and Ranveer later dress up as ‘Raja Babu’ and they dance to the film’s song. Govinda even utters famous dialogues from his film. Ranveer has shared the Big screen with Govinda in 2014’s film Kill/Dill. During the 2014’s film promotions, Singh has said that Govinda is his biggest inspiration and he’s like a God to him.

Ranveer recently has talked about how vital it is to take risks and see things from a new perspective while discussing why he chose to work with a debutant director Divyang Thakkar for his next.

“It’s very important (to take risks) and I take the most amount of risks. What I do, I always play high-risk. In my choices of characters, whether it is the acting choices I make within the framework of those characters, I’ve always played high-risk. As far as Jayeshbhai is concerned, yes, he’s a debutant director, but he (Divyang) is a prodigy, he’s an absolute sensation. He is waiting to be unleashed on the world.”

Ranveer further added, “Adi Chopra, my mentor called me and ‘I have a miracle script and I need you to get a narration. I was like okay.’ And when I got the narration, I didn’t know when I was laughing, when I was crying. I was laughing through tears, and crying through my laugh. It was such an emotional story, so full of heart, so funny, so entertaining throughout. I don’t think Divyang himself realizes what a talent he is! He’s completely oblivious of what he’s gone and written. Adi sir, Maneesh sir and myself, we keep saying…this kid…what is he going to write next if this is what he has written for his first film. I don’t think he’s aware of what he’s written. It is something that I am extremely special and I know he is a first-timer and I’ve only worked with established directors. But, I just went with the promise of this kid and what he’s written is just scintillating material.”