Kicking off the year 2022 on a pretty banging note, SEVENTEEN’s resident producer-singer-songwriter Woozi has made an impeccable solo debut with his mixtape ‘Ruby’. After teasing the solo mixtape for a few weeks, the musician dropped a captivating music video for the same. 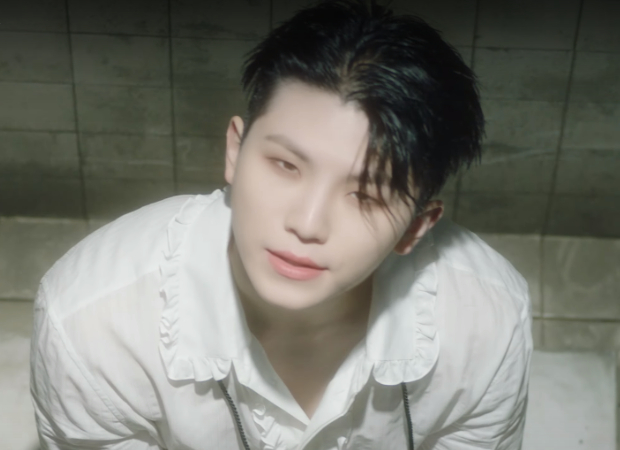 Titled ‘Ruby‘, Woozi croons the funk-infused pop-rock track in English – “Baby girl you’re making me a beautiful jewel / Every time I look at you I keep turning red / I’m not going back, go colour me like you / My forbidden fruit / She got the ruby lips.” The music video begins with Woozi, who is gearing up for a fashion show surrounded by several stunning models. In the majority of the scenes, he is in a red suit  [which clearly is the reason we need 2-5 business days to process it all]. The sensuousness of the sound, the alluring guitar riffs, and drums, the powerful vocals which Woozi is known for, the playfulness yet classiness of the beats truly delights a listener.

Woozi, who has composed, written, and produced the track with resident producer Bumzu and Park Ki Tae, has often played with genres so it doesn’t come as a surprise that his solo debut is so captivating and seductive.

Woozi becomes another member to have his solo debut release. SEVENTEEN’s vocalist DK released a new solo holiday song called ‘You’re My Christmas’. In 2021, Hoshi dropped ‘Spider‘, The8 released Korean and Chinese versions of ‘Side By Side‘, Mingyu and Wonwoo released ‘Bittersweet‘, Vernon with ‘Bands Boy’, and Jeonghan with Japanese and Korean versions of ‘Dream’.

The agency Pledis Entertainment had earlier confirmed that each mixtape will be followed by a new volume of ‘The Thirteen Tapes’ which includes an interview and photobook. This sort of confirmed that all 13 members will have solo debut.

ALSO READ: From BTS to TWICE, SEVENTEEN to TXT, Baekhyun to IU – 25 Korean songs that defined 2021